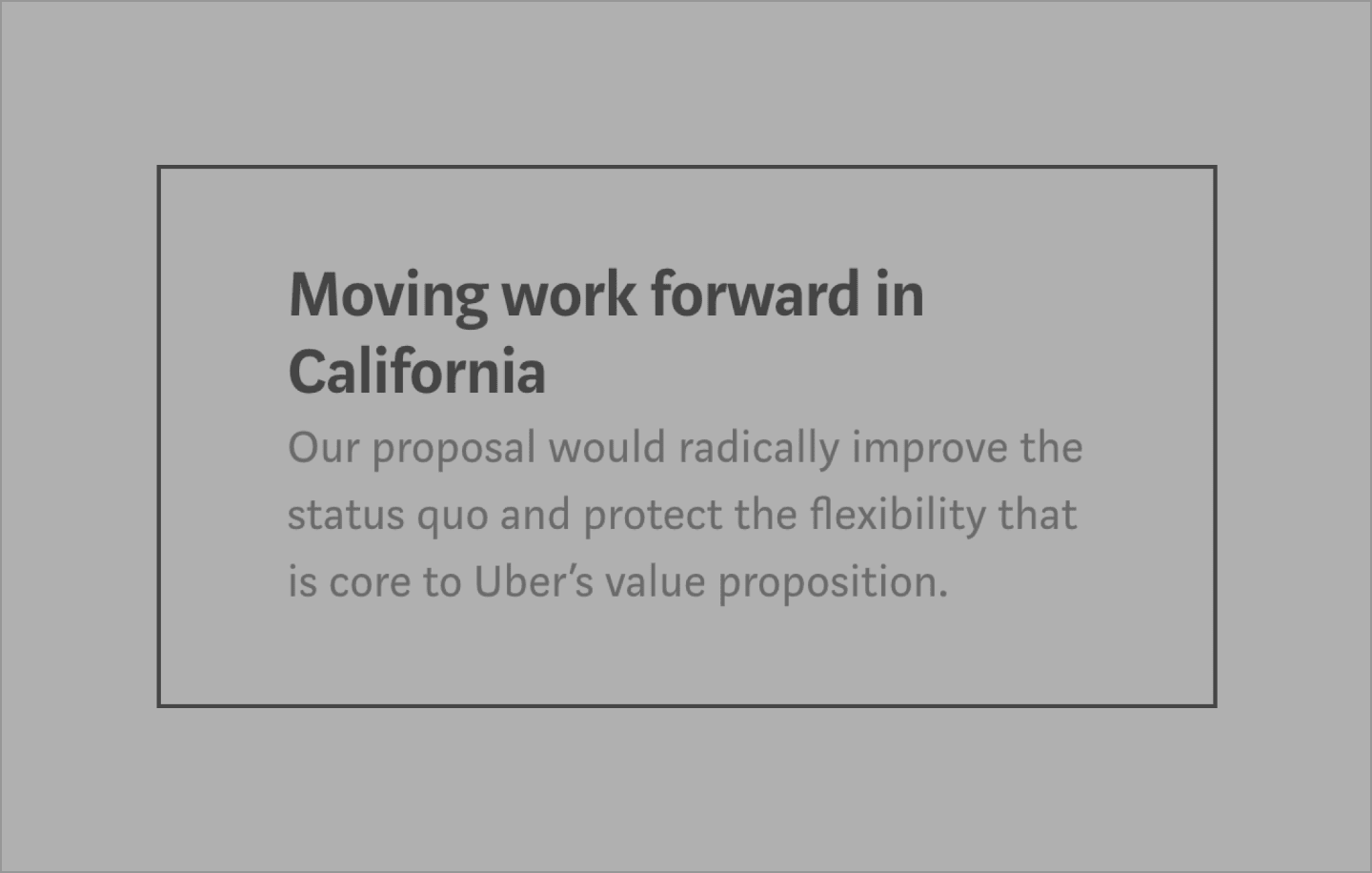 Tell us your driver flexibility and independence story, and then share with your friends to spread the word →

For years, drivers have consistently told us that the primary reason they choose to use Uber is because of the flexibility to work how, when, and where they want. Survey after survey has confirmed this, and academic research has also shown that drivers derive real economic benefit from that style of work.

But ridesharing has grown to be an important part of the economy and our cities’ transportation systems, and we recognize that just providing flexibility is not enough. Millions of people across the country have elected to work with Uber, and today, society has a different expectation: that independent workers not only enjoy flexibility, but also have access to a safety net and other protections — and that technology platforms like ours step up to do their part.

Uber is ready to do our part. That is why we have been at the table in California — with other rideshare companies, lawmakers, the Governor’s office, and labor unions — to propose a truly innovative framework that we believe would preserve Uber’s key benefit for drivers (flexibility) and key benefit for riders (reliability), while improving the quality and security of independent work. California lawmakers should consider drivers’ unique needs first and foremost, and provide leadership with a new model for workers, not just add to the growing collection of industries carved out from the Dynamex decision.

We stand committed to make the necessary changes to our business to do right by drivers and ensure this first-of-its-kind framework becomes a reality in California. To be specific, this includes:

To be very clear: despite what some are saying, we are not arguing for the status quo, nor are we denying that independent work needs to be improved. And a false promise that employment is without its own challenges purposefully ignores the opportunity before California today to modernize the law to benefit workers. On the contrary, our proposal would dramatically improve the status quo and, we think, protect the flexibility that is both core to Uber’s value proposition for drivers and ensures a dependable service for riders.

But we need progressive legislation for this to happen, because existing laws do not allow for these important protections and representation, while also allowing for drivers to choose where, when or with whom they would like to work.

Indeed, the alternative — making all drivers full-time employees, whether or not they want it (and to be sure, most don’t) — would fundamentally change what Uber and ridesharing is. It would also effectively require us to do something that is both unrealistic and never been done before: on-demand employment. As experts have noted, converting drivers to employees will inherently come with tradeoffs, for them and for us.

This would likely reduce the scope of where Uber operates and would prevent drivers from working at times or places where the number of drivers outstrips the demand for rides (e.g. in a quiet suburb at odd hours). While we embrace the challenge for ridesharing to improve, the ability to find extra income and a convenient ride past midnight and in areas of the state that need it most should be protected. The Rideshare Guy, a well-known personality amongst drivers, put it this way: “It doesn’t take a rocket scientist to realize that if drivers were guaranteed a minimum wage, you wouldn’t be able to just flip on the app anytime from 10AM to 3AM because there would be way too many drivers and not enough rides.”

The framework we have proposed would be innovative for all parties involved. For the labor movement, it would mean 200,000+ new members joining the fold overnight. For companies like Uber, it would provide the legal clarity needed to offer drivers access to benefits while maintaining a highly reliable service. And for California, it would be yet another moment for our home state to once again lead the nation in finding creative, pragmatic and groundbreaking answers to important societal questions.